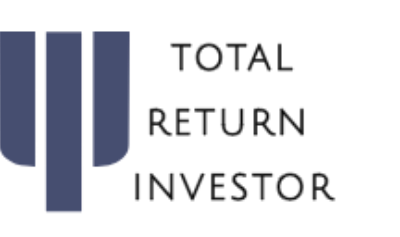 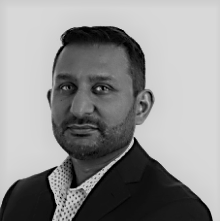 Canadian third quarter GDP of 2% was softer than expected, which did not include the October and November decline in oil prices.  Economic growth for the fourth quarter will likely be lower than the Bank of Canada’s current expectation.  TRI believes the Bank of Canada and the Federal Reserve might be on the verge of a policy error by continuing to raise short term interest rates as economic headwinds build and economic growth slows.  The market has now reduced expectations of a December rate hike in Canada and higher rates in January 2019 will be a ‘close call’.

The TRI Cycle and Trend Signals are shown below.  These signals are as of market close on November 30, 2018.  Please see the TRI Overview document for further information. 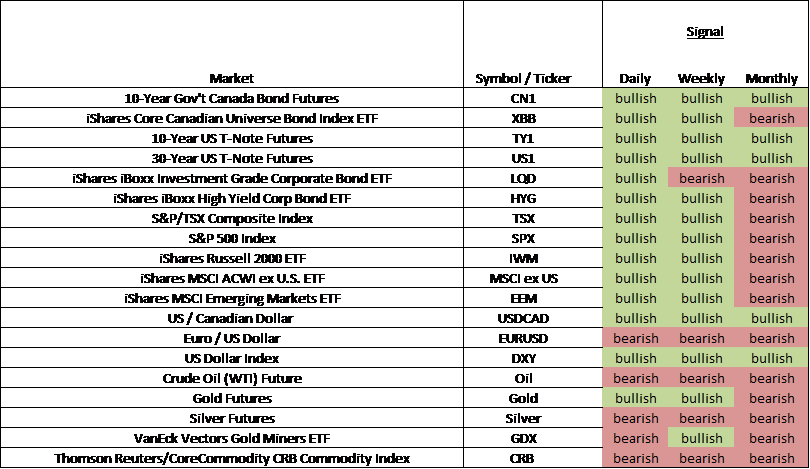 The Canadian economy grew at a 2% annualized rate in the 3rd quarter of 2018, with September 2018 growth lower by -0.1%. This is the first monthly decline in 8 months as spending on facilities, machinery and equipment decreased by 7.1%.  According to economists, lack of clarity on NAFTA renegotiations caused the lower business investment.  Expectations are for a rebound in the 4th quarter as USMCA trade pact is closer to being ratified.  Lower oil and gas investments were also noted, but TRI notes WTI Crude prices ended September at close to 4-year highs above $75US per barrel. It makes us question this reasoning.

Last month TRI stated the Bank of Canada and the Federal Reserve might be on the verge of a policy error by continuing to raise short term interest rates as economic headwinds build and economic growth will be slowing in 2019 and 2020.  The market now thinks a December rate hike in Canada is unlikely and higher rates for January 2019 will be a ‘close call’.  The low Q3 GDP print with WTI oil falling more than $25 per barrel or 33% lower in October and November will not support the Bank of Canada’s position for further rate hikes.

Canadian oil producers are facing an even greater challenge with Western Canadian Select (WCS) falling to a record low of $15US per barrel.  The WCS discount to its US benchmark crude exploded to as much as $52 last month, also a record. The spreads have since narrowed but remain at the wider end of historical ranges.

Much of Canada’s oil production is land locked as we rely on pipelines and rail to move our crude to refiners in the US or ports.  Canadian pipelines are flowing at capacity while oilsands production volumes continue to increase.  Couple this with record levels of US crude production and US no longer being a net importer of oil has reduced the value of Canadian oil.  There is ample US supply for refiners from US producers.

Longer-term pressure on Canadian crude prices do not appear to be letting up. In fact, the economic challenge may increase for the foreseeable future:

Low oil prices will be a drag on the Canadian economy and we fear many are underestimating how low oil may fall, the length of the decline and its negative impact on the Canadian economy. Caution is warranted for the medium-term.  Short-term there might be some relief, please see Commodity section for information.

TRI has been expecting an important weekly and annual lows for equity markets in the late October to December 2018 time period.  The S&P/TSX Composite had been on a weekly sell signal since July 27, 2018, after a weak weekly and annual cycle top in July 2018.  The TSX fell almost 12% from the seasonal high to the October 2018 low, which we believe marked the current weekly and seasonal cycle lows.  (Anytime we have a potential low made in the early portion for the timing band, we need to allow for more price action to confirm as there is potential for another low still to be had). 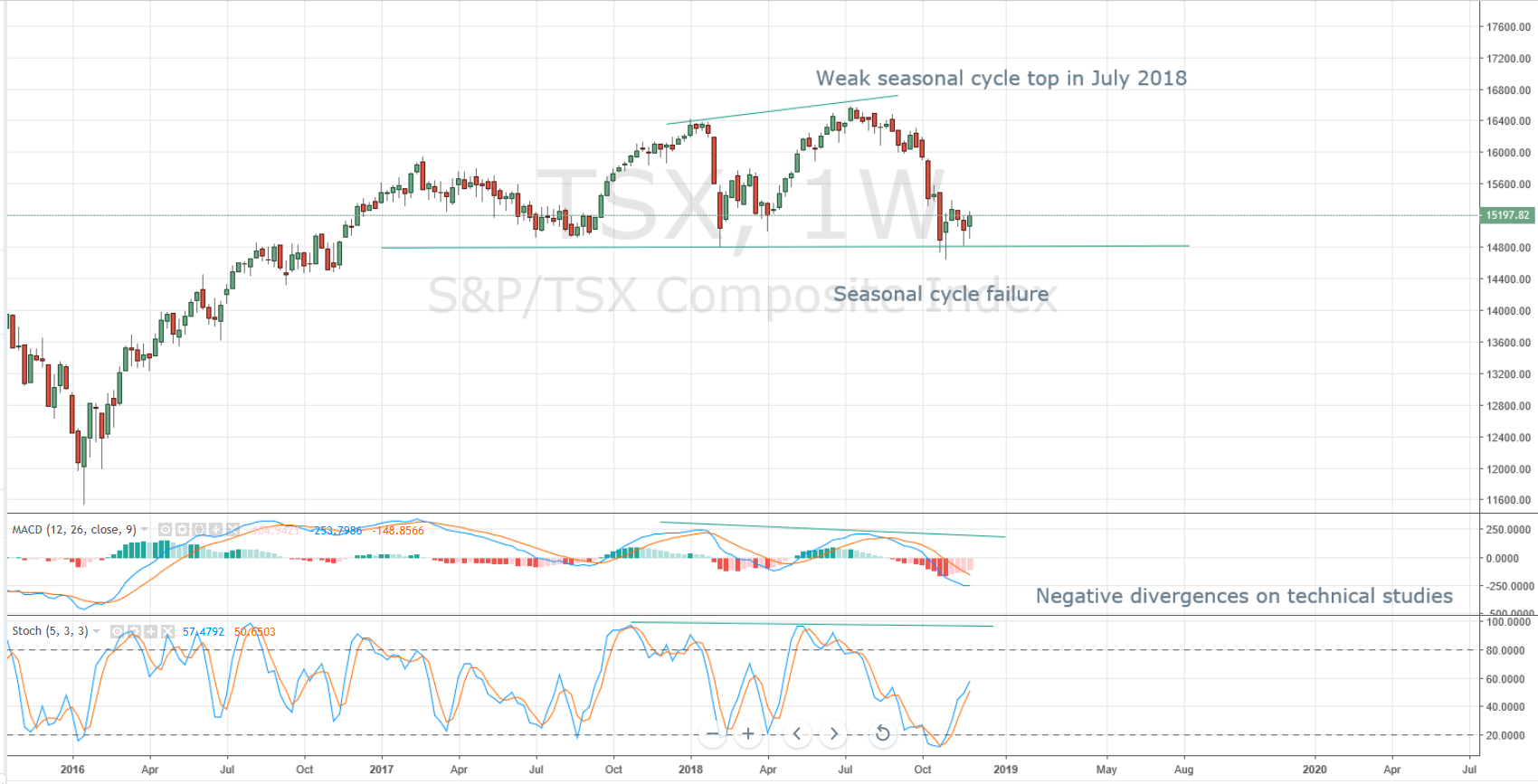 As seen in the chart above, the TSX rallied from February lows to a July 2018 high on diverging technicals (higher index prices were accompanied by lower highs on indicators).  The October 2018 low was a seasonal cycle failure as it closed below the previous February 2018 seasonal cycle low. This is the first seasonal cycle failure we have seen on the TSX since the larger 4-year cycle low of 2016.   This failure now signals the top of the larger 4-year cycle. TRI expects the bounce out of the October 2018 lows to be a counter-trend move higher which will ultimately fail with prices to fall below the October 2018 levels. Given the short-term oversold conditions in the TSX, TRI believes we will see a bounce higher before the larger degree downward cycles and trend come back into force.

The S&P500 Composite Index has held its Oct 29 low and bounced back above the 2,700 level by the end of November.  Indications are the Oct 29 low marked the daily, weekly and annual cycle lows (as we are now close to the end of the expected timing band low of late October to December 2018).  If prices do fail and move lower, we will have at assess at that time if the weekly and annual cycle are extending or if we have failed cycles. 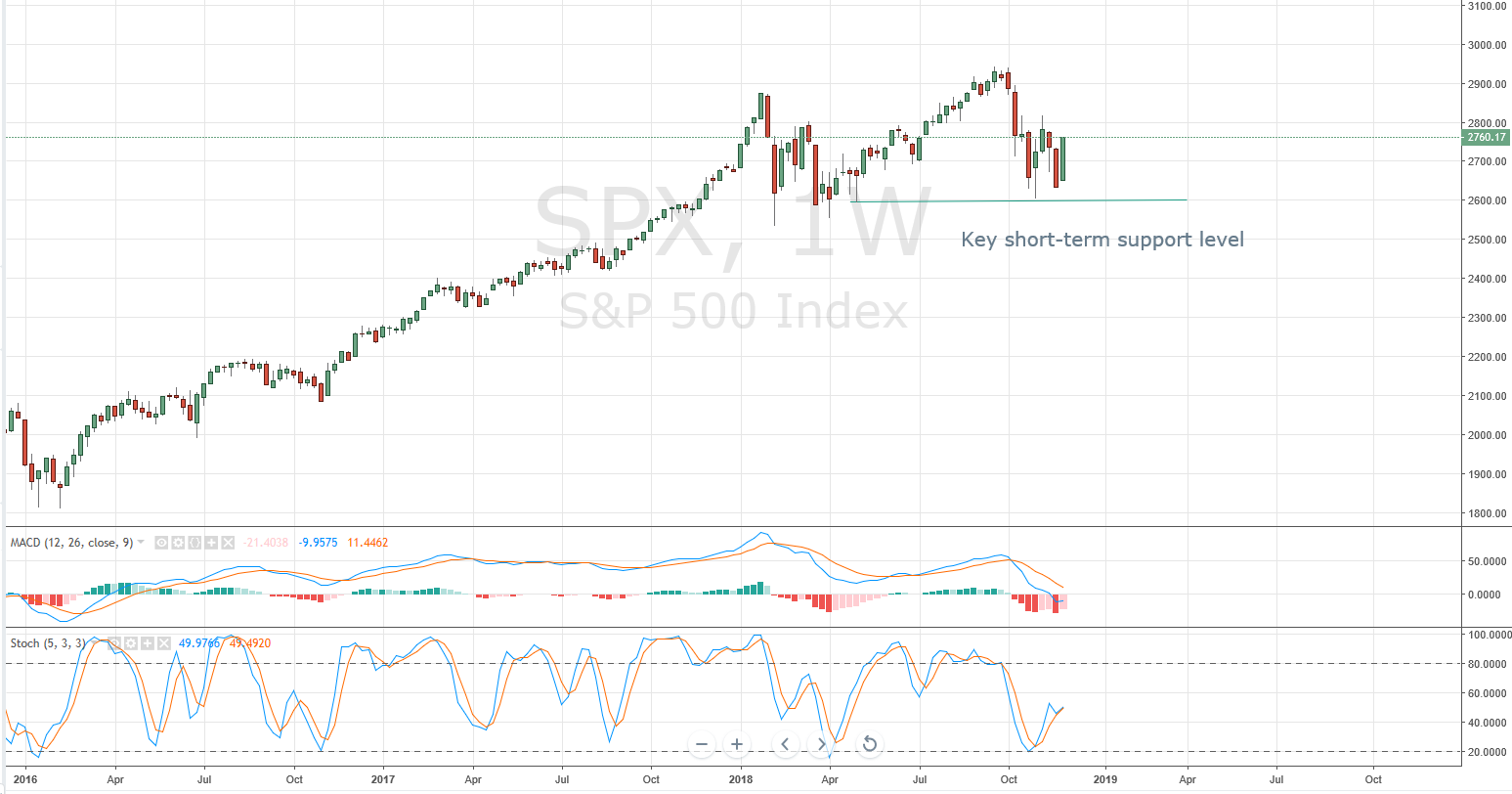 TRI expects the S&P 500 to move higher into the 2,850 to 2,900 level over the next several weeks. The form and duration of this move higher from the Oct 29 lows will provide more information on how much higher price can potentially move before resuming its larger degree correction of 20 to 30% into late 2019 or early 2020.  New highs are a lower probability, but not out of the question.

Corrective markets are inherently difficult environments with massive whipsaws of quick powerful moves in either directions along with flip-flopping investor sentiment.  Capital preservation should be priority.

Gov’t of Canada 10-year rates have fallen about 0.35% from their October 2018 high of 2.6%.   Interest rates and growth expectations have fallen in conjunction with lower oil prices and increasing Canadian and global economic headwinds.  Now the question arises, have Canadian rates peaked before their US counter-parts or will we have one more push higher? 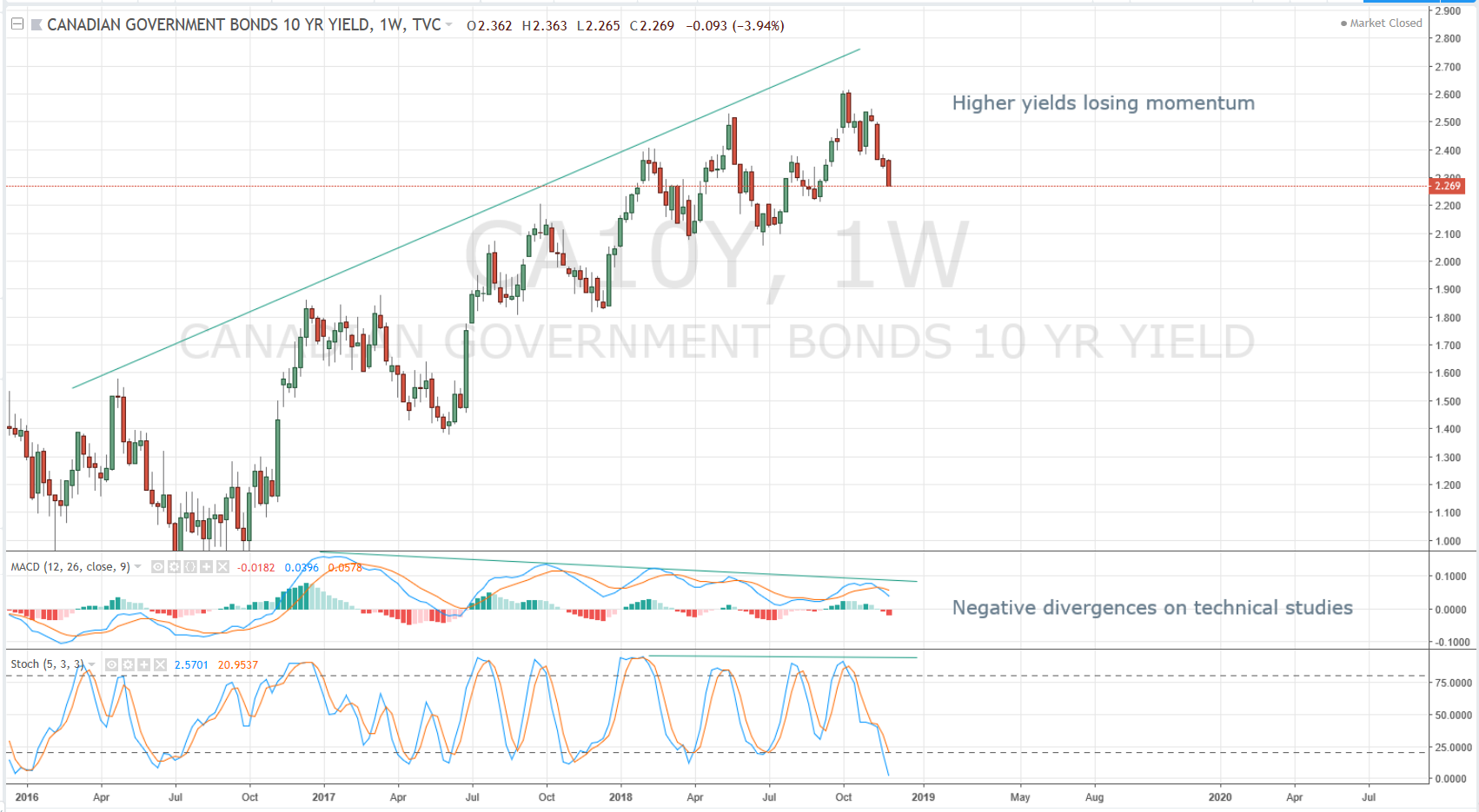 TRI noted in our last commentary that interest rates were in a topping process as higher yields appeared to be losing momentum to the upside.  Interest rates have turned down from the October 2018 high, but we do not have evidence to yet to confirm the annual cycle top for interest rates. We may still see yields push higher one more time before topping.

As seen in the chart above, Canada 10-year interest rates are on a weekly sell signal and November has seen a monthly swing high completed. These are two necessary conditions to mark seasonal cycle tops, but we need to see a breakdown of the trend channel.  Furthermore, on a short-term basis, the daily and weekly prices are oversold and ripe for a bounce higher. If this bounce higher is counter-trend and fails in a left translated manner or peaks before the mid-point of the expected timing band low, then at that point we will have higher level of confidence of rates having topped.

Currencies – Is the USD Ripe for A Pause?

The DXY Index (US dollar) moved higher into the end of November 2018 and is now into its 8th month of advancing out of the February 2018 4-year cycle low.  USD has been stronger against almost all global currencies this year, including most emerging market currencies.  On a short-term basis we are beginning to see negative divergences developing from technical indicators which signal conditions for a correction. We will continue to follow our TRI Cycle & Trend indicators but are on alert for a potential weekly and annual cycle corrections. 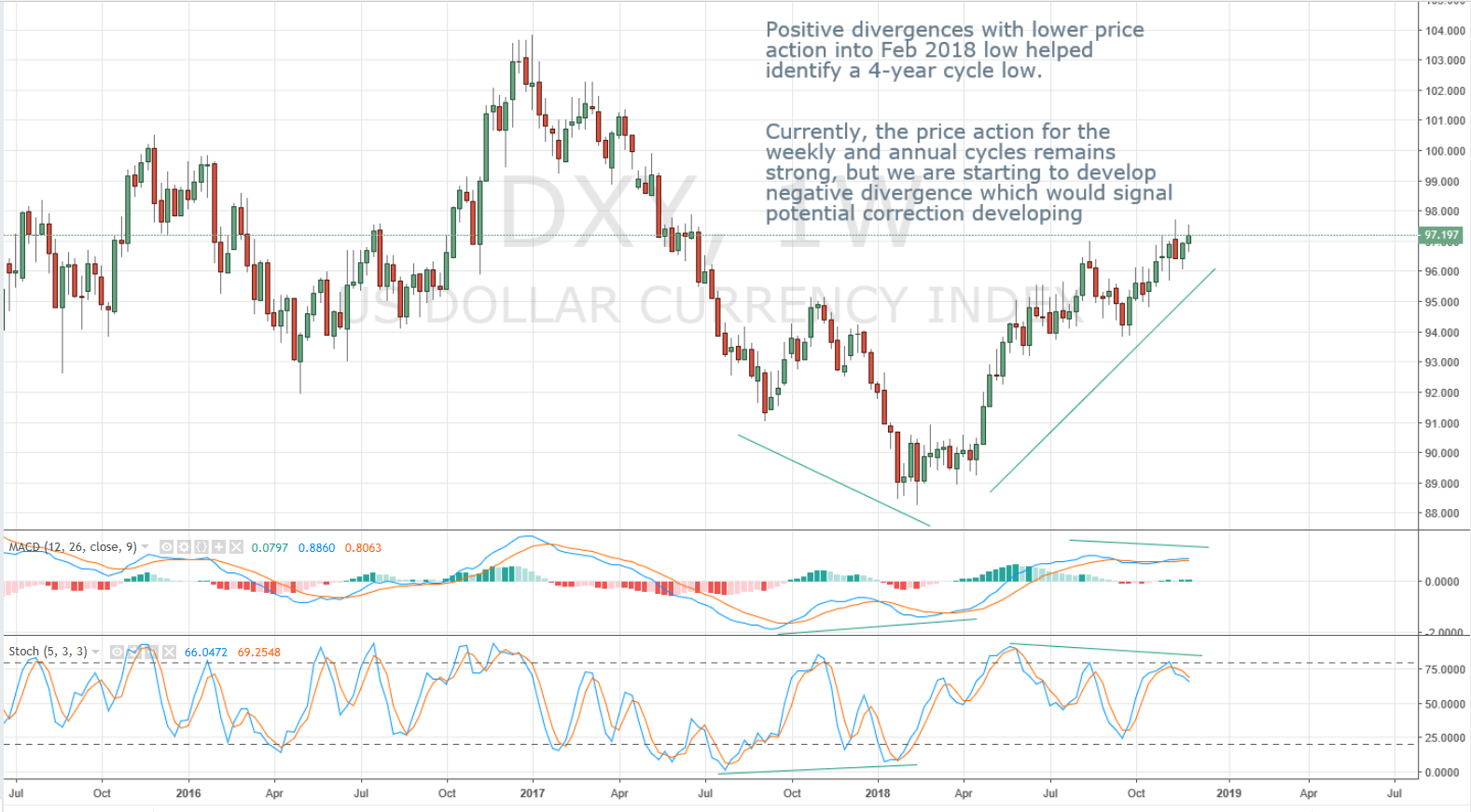 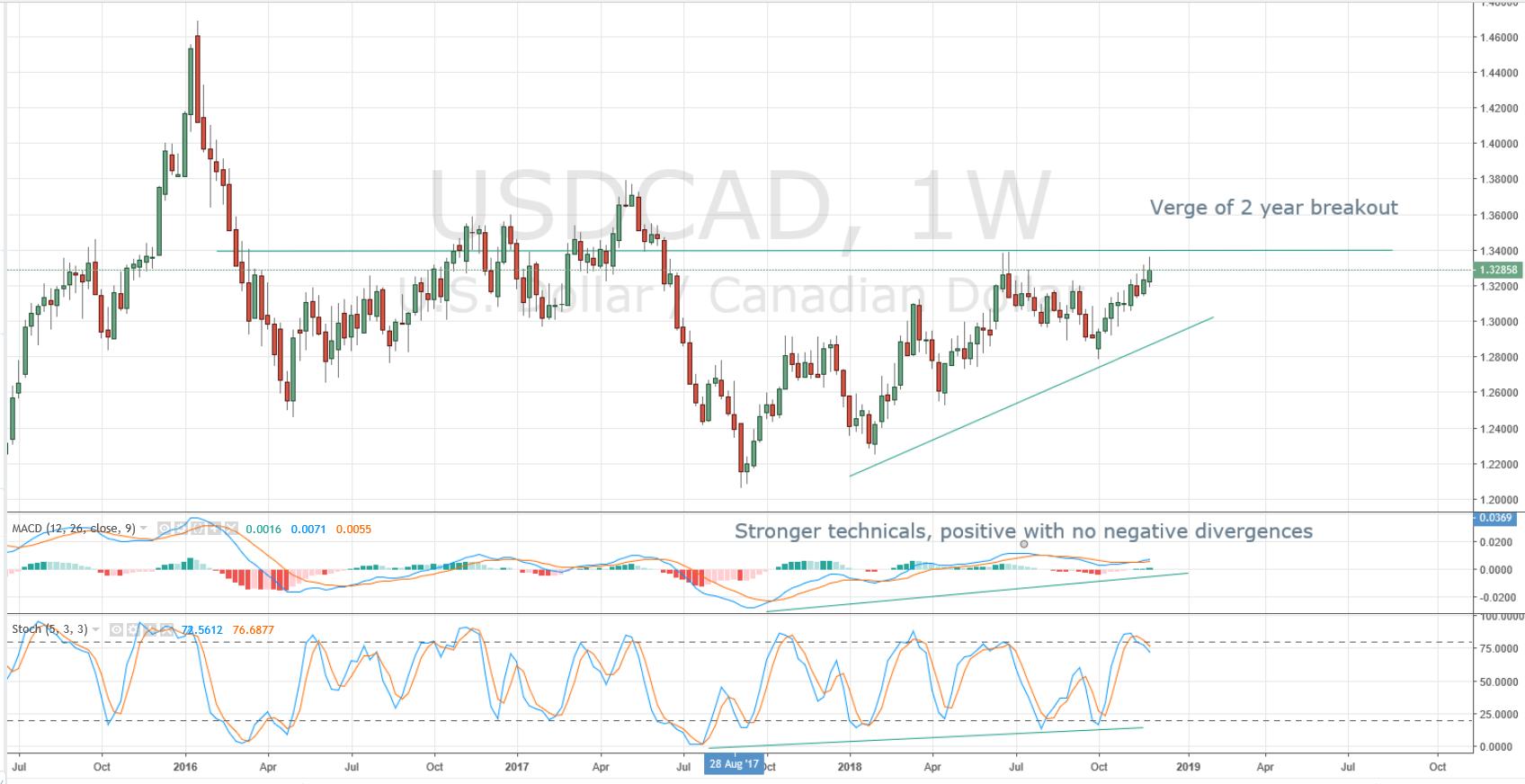 The USDCAD is on a daily, weekly and annual buy signal as all degrees of cycles and trends are currently positive for higher levels.  Short-term we can see expect heightened volatility as we bump into the 1.34 resistance level.  The USDCAD might also experience some weakness (US dollar weakness & CAD dollar strength) if we see oil bounce from extremely oversold levels.

Crude oil is on a daily, weekly and monthly cycle bearish signal and is reaching deeply oversold levels on several time frames.  Crude oil fell $25US per barrel from its recent early Fall high of ~$75US per barrel to close just above $50US per barrel at the end of November.

Longer-term the price action for oil is not constructive as oil is trading at price levels last seen in 2015.   The price moves from the 2016 lows have been in a corrective manner, which means prices have shown high levels of overlap as they oscillated to their 2018 high. As with all cycles, we will have counter-trend moves higher, even in bear markets.  Longer-term TRI expects lower oil prices, however short-term the level of negative sentiment and deep oversold conditions make crude oil ripe for a decent size bounce. 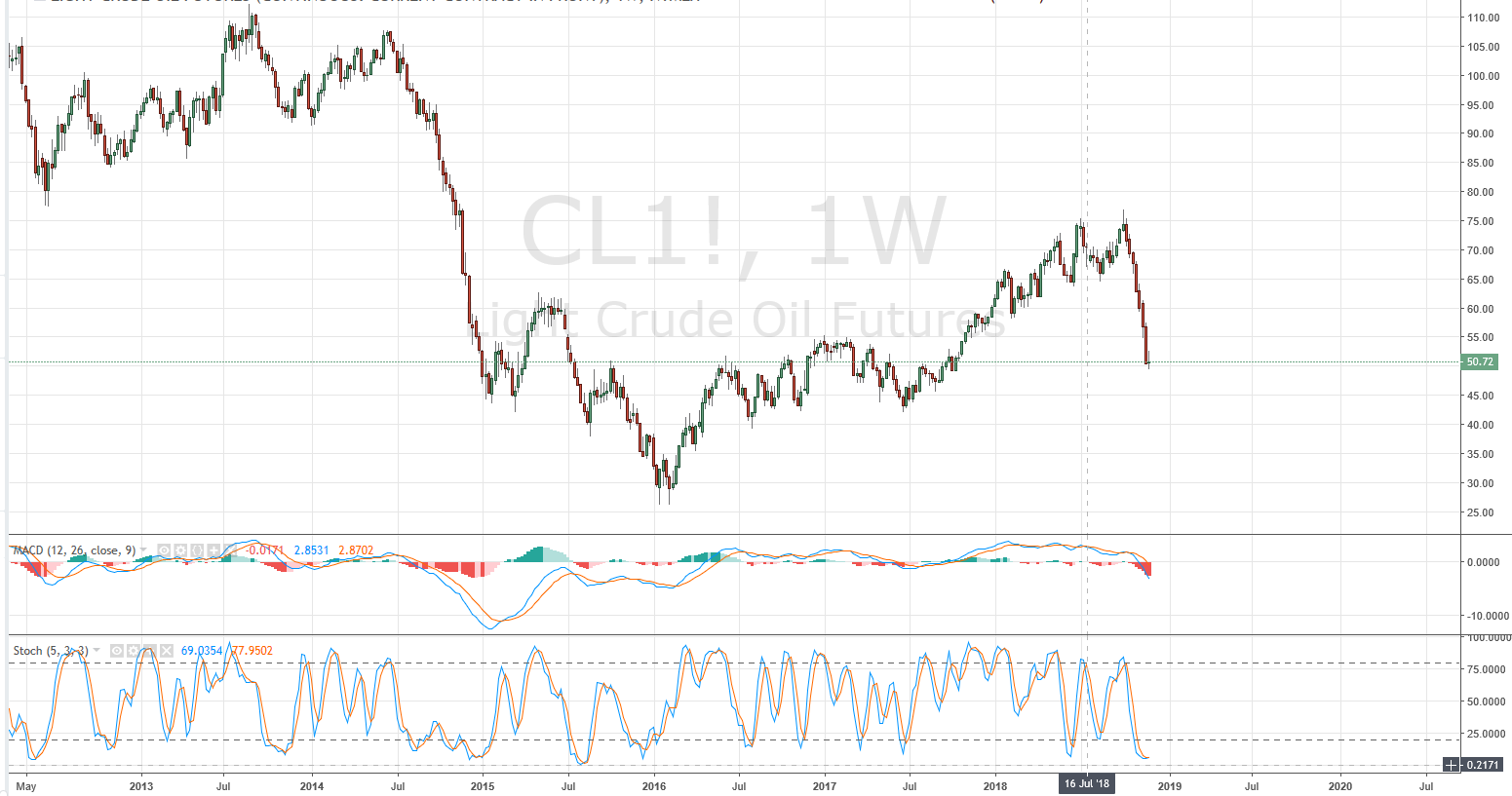